Skip to content
Previous Next
A New Raman System For Application in a Nuclear EnvironmentSarah Marsh-Collings2021-03-31T08:45:36+00:00

In partnership with Jacobs (formerly Wood Nuclear) and i3D robotics, ISI has developed a new standoff Raman system for the remote sensing of chemical agents within nuclear facilities.

The operation to decommission the legacy nuclear fleet is one of the most significant challenges facing us today both from an environmental and a financial standpoint. A key challenge is the identification and characterisation of radioactive material and other hazardous substances. Raman spectroscopy can be used to identify substances, however, given the challenging nature of the environment, instruments typically cannot be in proximity to the substance to be measured. Currently, hazardous substances are typically identified by the visual inspection of an experienced operator, who must then collect samples to be analysed. This is an expensive and potentially hazardous process. Therefore, in-situ identification of unknown samples that may be hazardous or indicative of corrosion without the need for direct human interaction is a clear advantage.

Working with partners, Jacobs, and i3D robotics, a team at ISI has been developing a new stand-off Raman system capable of identifying a range of chemicals of interest to the industry at 1 meter from the target substance. 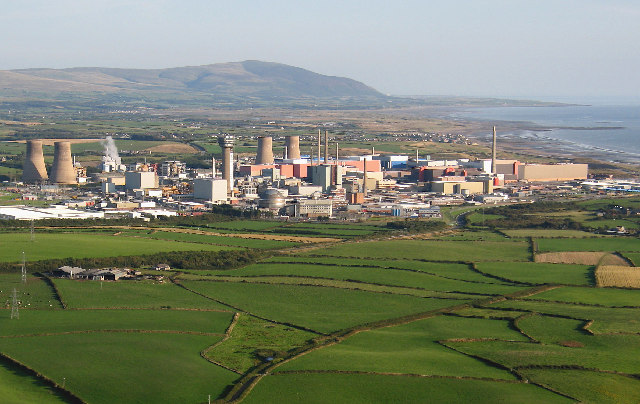 Aerial view of the Sellafield site in Cumbria.

Hazardous material (acids, alkalis, and organic solvents) within nuclear facilities may be derived from multiple sources and may have been stored in containers, tanks, or silos, which have been in operation for several decades. The composition of the remaining waste and the condition of the storage vessels are often unclear or unknown. Decommissioning these facilities involves processing waste into a form suitable for long-term storage (often by transferring it to a separate facility) and monitoring the processed waste to ensure there is minimal degradation of the processed material. In addition, many hazardous materials are used throughout the nuclear fuel processing cycle. Therefore, before the decommissioning of redundant facilities can commence, it is essential all the hazardous material has been identified and removed. Uncertainty regarding the presence and nature of this material presents significant safety concerns, which can lead to costly additional work or delays during post-operational cleanout (POCO) operations. 200 microns

Working with partners, ISI has developed a new Raman system comprised of three independent assemblies: a new class of spatial heterodyne Raman spectrometer, an ROV-mounted Raman probe, and a Raman excitation laser. The Raman probe section mounted on an ROV was combined with a 3-D vision system to view, locate, and map potential target samples. The ranging information provided by the 3-D vision system allowed for the optimization of the working distance of the probe and this enhanced the quality of the Raman signal captured.

The modular configuration of the Raman systems allows the electronically sensitive components (spectrometer and laser) to be sited outside of the target environment and so avoiding the complications of the harsh environmental conditions. The Raman probe is fixed to the ROV via a manipulatable interface and connected to both the spectrometer and laser via 15-metre fibre optic cables (longer cables may be used).

The spectrometer required for this application required excellent levels of sensitivity due to the inherent weakness of the Raman scattering process. High sensitivities at large stand-off distances can be achieved by increasing the laser power telescope diameter. Pulsed laser Raman instruments have achieved stand-off distances of more than 1 kilometre. However, in a nuclear facility, pulsed instruments cannot be used due to the large power densities at the target which may cause ignition. Continuous-wave (CW) lasers have made stand-off Raman measurements of nitrates and explosives of distances up to 250 metres using large 200 mm diameter telescopes. In this instance, low power density at the target was an absolute requirement, so the total laser power had to be reduced or the spot at the target must be increased resulting in the target having large etendue. For the spectrometer to collect the maximum possible light from the target and make observations of the required resolution, the spectrometer etendue must match or exceed that of the target.

To achieve the required performance specifications and collect all the light from the target, a static Fourier transform (FT) spectrometer, known as a spatial heterodyne spectrometer (SHS) was selected assembled in a Michelson interferometer configuration with the mirrors replaced by reflective diffraction gratings. The two wavefronts from the gratings pass through the beam splitter and then interfere to form a fringe pattern in space that can be passed through an FT algorithm to extract the spectral information.

The key advantage of this design is for a given resolution it provides a 100-fold increase in etendue over what can be achieved compared with traditional dispersive systems and, unlike a traditional FT spectrometer, has no moving parts. 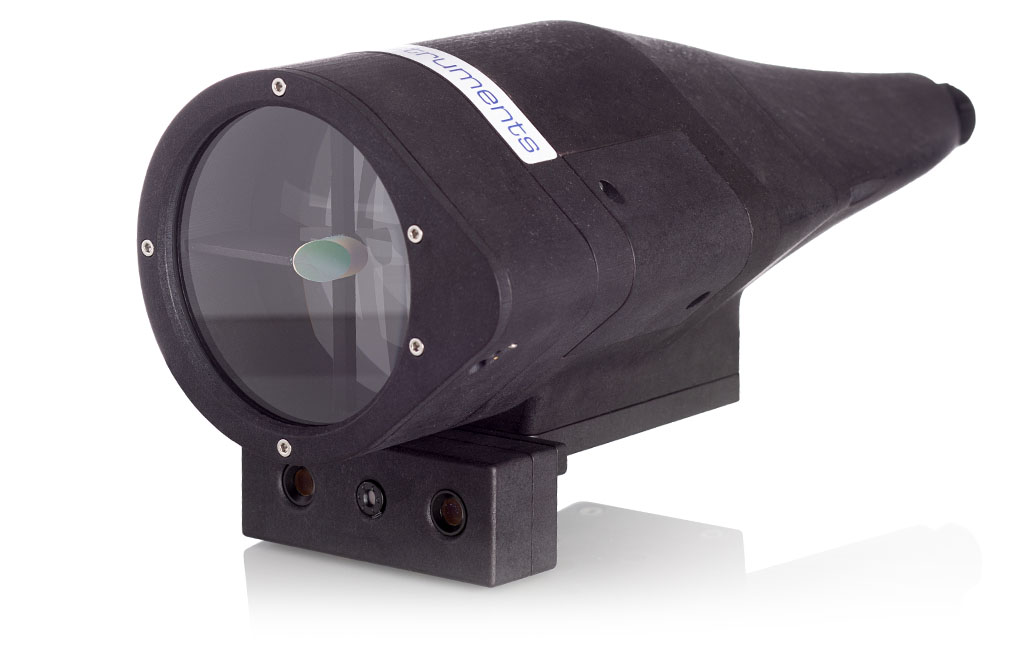 The stand-off Raman probe was designed to collect and couple light into a 1mm optical fibre. Developed for deployment into radioactive environments, the probe was designed with smooth surfaces and an optical window to enable cleaning and potential enclosure within a disposable covering.

For this application, the instrument operating wavelength was selected to be 785 nm to minimize fluorescent contamination whilst maintaining a good level of sensitivity. To achieve the required power density, the laser was set to diverge, resulting in a 5mm spot at 1 m. This resulted in the target having large etendue. 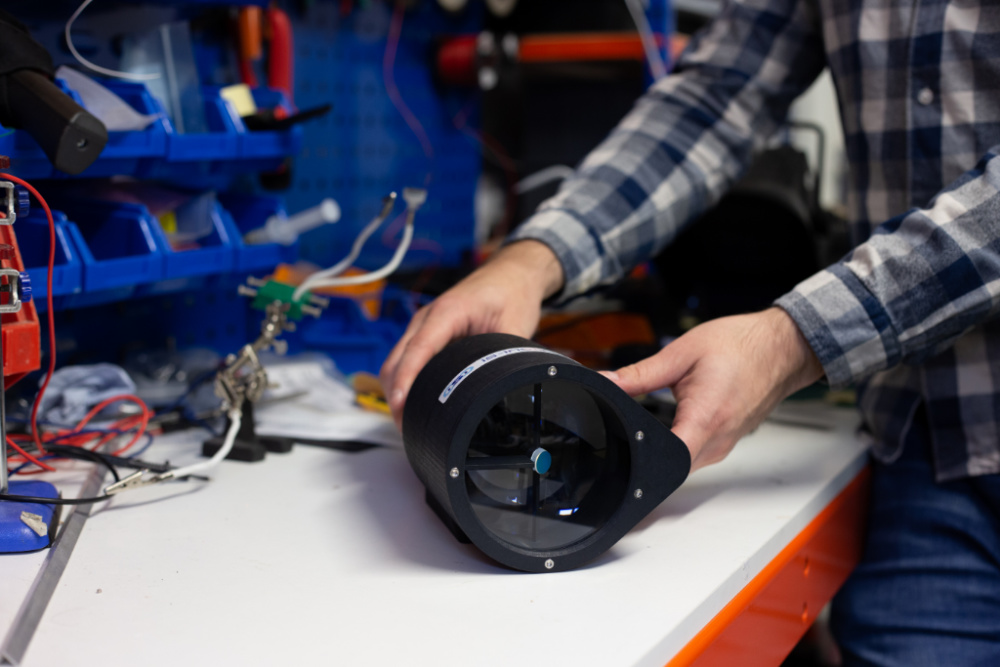 The ROV used for these tests was the Wood ROV022 high-mobility platform. The ROV is a nuclear-hardened tracked crawler with four independent drive pods that can be rotated allowing the system to climb over obstacles or alter its profile to fit within small spaces. Both the probe head and a stereo camera unit were mounted to the ROV, the latter providing ranging information. 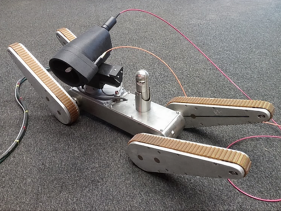 The graphs below show the Raman spectra of chemicals measured by the new Raman system. 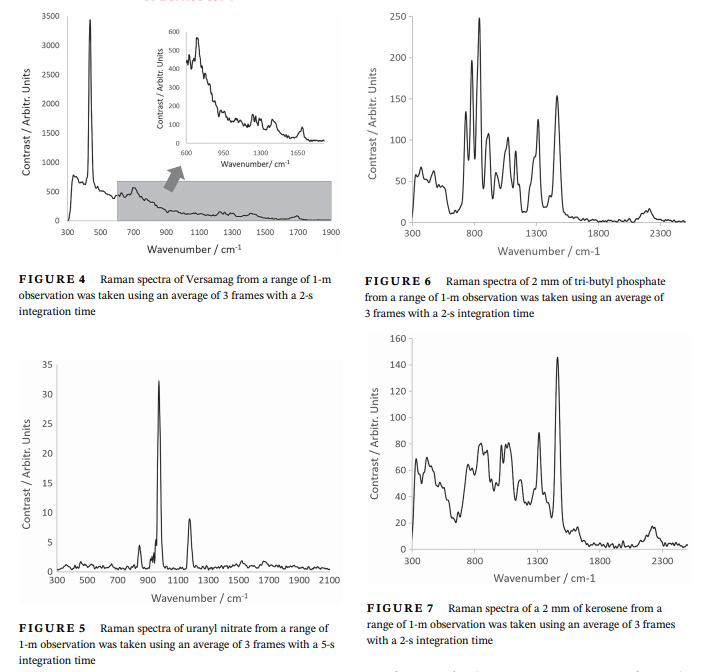 The instrument has been tested against a series of material pertinent to the nuclear industry: Versamag, a Magnox sludge simulant, uranyl nitrate, tri-butyl phosphate (TBP) and kerosene, all of which are present during reprocessing operations. It has demonstrated the ability to identify target substances at stand-off distances of 1 m and uses a 3-D stereo camera system to locate possible targets and provide ranging information to guide the focusing position of the Raman probe. Fibre-coupling allows the sensitive equipment to be mounted outside of the hazardous environment. This could allow the system to be deployed within a high-radiation waste facility with minimal nuclearization whilst producing limited secondary waste.

This is the first time stand-off Raman measurements have been made within a nuclear test facility, resolving all the unique inherent challenges.

This project was funded by Innovate UK and managed by FIS360 with Game Changers in partnership with Sellafield and the National Nuclear Laboratory. ISI worked in collaboration with i3D robotics and Wood Nuclear (now Jacobs).