A new transmission Raman spectrometer has been developed using a spatial heterodyne spectrometer (SHS), taking advantage of the high etendue inherent in this class of instrument to maximise the light collected from the target. The system has been tested against paracetamol tablet samples. The instrument has been shown to accept light from 0.05 mm up to a 3 mm core diameter fibre bundle with a numerical aperture of 0.22, whilst no degradation in resolution is observed.

In recent years, there has been an increased interest in the use of Raman spectroscopy to monitor a variety of processes within industry. Most commercial laser-based spectrometers are designed to observe in a backscatter arrangement. The laser light is focused at the surface of a sample and the light emerging from the intercepted surface is recorded. This can lead to errors if the sample is heterogeneous in nature. Transmission Raman provides a bulk-average measurement of chemical compounds within a given sample minimising the influence of such samples. The technique is of significant interest to the security sector for the detection of counterfeit drugs and the pharmaceutical industry for quality assurance observations.

In a transmission Raman arrangement, the laser is fired at the target and allowed to disperse through the sample. The light exiting the sample on the opposite side is captured and measured. As the laser light propagates through the sample the Raman scattering is excited from the bulk of the volume. The photons exit the sample from a large target area, often displaying Lambertian scattering properties. The light can be strongly attenuated by the sample, resulting in a weak Raman response. The large etendue of the Raman light is a significant challenge for the analysing spectrometer if the spectra are to be measured with sufficient resolution. Consequently, a significant fraction of the Raman light is lost, reducing the strength of the observed signal. This lack of signal has limited the development and use of Transmission Raman, in wider industry.

In a dispersive spectrometer, the resolution is controlled by an entrance slit and its F-number or NA, which limits the solid-angle area product, (AΩ or etendue) that can be accepted by the instrument.

To achieve a resolution of < 10 cm-1 with an excitation wavelength of 785 nm and a measurement range of 785- 920 nm, the slit width will typically be less than or equal to 50 µm in size, with a f/2 or slower collection lens, limiting the amount of light that can be collected. This has resulted in the development of fibre bundle based instruments. In these devices, a round bundle is presented at the target and a linear fibre stack at the spectrometer. These devices increase the etendue and can make the required observations, however, they require more complex optical arrangements and can be expensive. Transmission Raman observations have also been made using Fourier transform spectrometers.

An alternative option is to use a Spatial Heterodyne Spectrometer (SHS) which has the configuration of a Michelson
Interferometer but with the mirrors replaced by diffraction gratings. For a given resolution, an SHS can achieve a > 100-fold increase in etendue over a single fibre coupled dispersive device. This allows the instrument to collect light from a significantly larger sampling area, ideal for Transmission Raman measurements, maximizing the signal return. This in turn will lead to superior signal-to-noise-ratio (SNR) or shorter integration times being required for a particular measurement.

The instrument has no moving parts or expensive optical components, as required in FT-IR devices. Spatial heterodyne systems have previously been used to make Raman measurements, however, the throughput advantage the design provides has not been fully exploited.

In this paper, a new spectrometer is described based on the SHS design, to fully exploit this inherent etendue advantage. The system has been designed to be fibre coupled and can accept light from fibres with core diameters of up to 3 mm and a numerical aperture (NA) of 0.22 (with no internal adjustment required).

The system uses a cooled IVAC Front illuminated CCD (from Andor), and two reflective diffraction gratings with 60 lines per mm, 70 × 70 mm in size. The diameter illuminated at the grating was 40 mm giving a resolving power of 4800. Giving a measured single-pixel resolution of 2.65 cm-1. The laser was fibre coupled (PD-LD Blue Box supplied by Laser 2000), with an operating wavelength of 785 nm, with 500 mW of output power. The laser light was then passed through a 785 nm, 4 nm bandwidth clean up filter provided by Semrock (LL01-785-12.5), to eliminate any spontaneous emission from the laser. The laser power was measured after the fibre and filter was 150 mW.

The measured sample was an approximately 5 mm thick paracetamol tablet. The light was collected by a matched pair of doublet lenses (focal length of 50 mm; diameter of 22 mm). Between the two lenses, a Semrock 785 nm long-pass filter (in addition to the filter mounted inside the spectrometer Fig. 2) was inserted to eliminate the laser light. The blocking level
was better than 106, with the transmission of the filter being > 95% across the target range. The collected light was then focused into a variety of 0.22 NA fibres of different apertures. Each fibre was then in turn coupled to the spectrometer. The 2 mm and 3 mm diameter fibres were formed from bundles of 550 µm core fibres (7 and 19 respectively). The net collecting
area of the fibre bundles being ~50% of the maximum that could be achieved, in both cases, when compared to a single core fibre. In addition, several 0.39 NA fibres were also tested with the system. However, given the coupling optics had a matched NA of 0.22, only the modes of the fibre associated with this NA were excited. All of the fibres were terminated with an SMA 905 with the exception of the 3 mm fibre bundle which required a custom ferrule termination.

The experiment was repeated with a standoff backscatter configuration; the laser spot was focused to approximately a 1 mm diameter spot at the tablet. The collecting probe has a mono-axial configuration with a pair of F/2 lenses. The signal observed was significantly stronger than in the transmission Raman arrangement, thus the required integration times to record 3970 counts were approximately an order of magnitude lower for the smaller core diameter fibres. 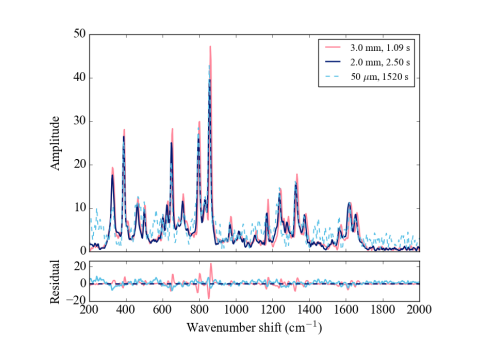 Paracetamol Raman spectra when observed by the 50 µm core diameter fibre (dashed blue) as well as the 2 mm (solid dark blue) and 3 mm (solid orange) diameter fibre bundles. Plotted underneath is the residual or deviation between the 2 mm spectrum and the other two spectra: 3 mm (orange) and 50 µm (blue). The spectra taken with the 2 mm fibre bundle was taken as a standard, with the other spectra showing a normalised RMS deviation of 7.2 and 6.7% for the 3 mm and 50 µm fibre spectra. We can see from the spectra that the deviation is due to increased noise in the case of the 50 µm fibre spectra, while the deviation in the 3 mm case was due to a change in calibration when changing fibre adapters.

As such, a new SHS spectrometer has been constructed compatible with a fibre input of up to 3 mm in diameter, with no slit being present within the spectrometer. The system performance and in particular its light throughput or etendue has been demonstrated in a transmission Raman configuration. The system will have significant advantages in quality control applications and the detection of counterfeit drugs.

Read the full paper as published in OSA Publishing.