The challenge for this week was to assemble the system specifically the spectrometer. All the parts are now the laboratory and have been confirmed to be in working order. The system will is mounted in an oversized box, so that the experiments can be performed easily.

The sequence of ideal assembly is of course well known, first the spectrometer is aligned with respect to the laser, and this is then imaged onto the detector and a spectra taken.  Finally a cylinder lens is mounted to collect all of the missing light. To confirm the system is mounted correctly the profile shape must be unchanged.  We typically use a paracetamol tablet spectrum to confirm the operation.

Now the alignment can be tricky and tedious, so our newest member of staff was volunteered. And you guessed it, on first go round the system did not work. So naturally the senior engineer stepped to the correct the issue realigned the instrument and …. It still did not work. For some reason when mounting the cylinder the performance of the overall system degraded.

So at this point we enter trouble shooting mode, we have made a significant number of these systems so the problem should not be too hard to find I stated with confidence.

Option 1: Normally when this type of problem occurs it is due to much Rayleigh light entering the system. Due to the multiplex disadvantage this issue has to be managed carefully. So we re-baffled and added an extra filter into the system.  The result – No change

Option 2: mechanically the system is a bit different to previous setup (being mounted in an experimental chamber), maybe part of the system is unstable. So we carefully examine a confirm everything is exactly in its correct place and have not moved.  Result: Nothing has moved

Erm a little head scratching, but not to worry many things to try yet.

Option 3: the problem is the cylinder lens, after all that’s when the performance deteriorates, maybe it has become damaged. So the lens is expected, Result: Its fine

Option 4: (suggested by our newest member of staff initially and subsequently ignored by the more experienced members of the team).  We are using a much larger area of the gratings. Maybe when we put the cylinder we are imaging from a bad / non flat part of the gratings.

So we remove the edge filter and align the Littrow position of the instrument to be at 780 so we can see fringes on the instrument. At this point the setup can be thought of as being similar to Fizeau interferometer and therefore measure of the matching underlying plate flatness can be acquired. Result: Success  !!!!! well sort of we have a problem (Figure 1) 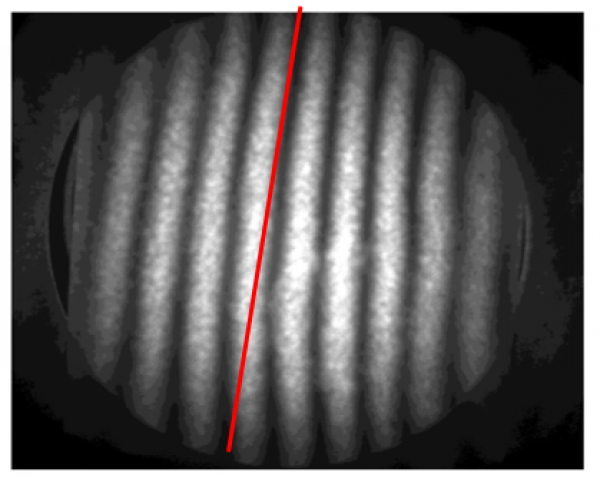 Some of the fringes show quite a pronounced deviation. Now some deviation is to be expected, the plates do not have to be very flat ~ l/4 is sufficient to achieve good performance. From the fringe patterns observed there is almost a fringe of distortion in the pattern. (a red line has been added to the figure to show this more clearly). This corresponds to the plates having an overall flatness of  ~ l/2.

So when the cylinder is inserted into the system it will in effect sum along the fringes, if the fringes are not sufficient straight we will lose resolution.  This fringes blur together

The next step is to solve the problem. There are currently three options

1/ How we are mounting these large gratings is generating distortion

So we remounted the gratings removed some of the tension. The resulting fringe pattern is shown in Figure 2. The distortion is drastically reduced and is now < ½ fringe. And therefore sufficient for overall system operation. 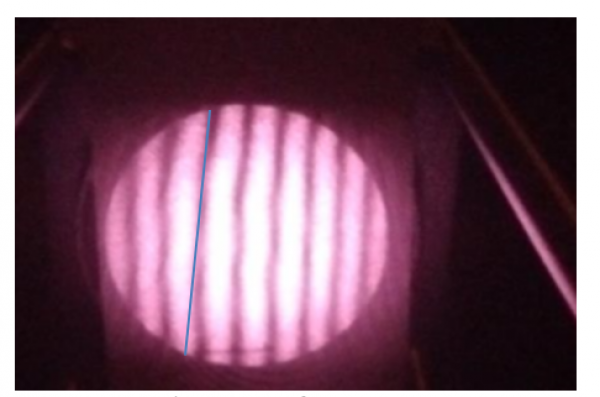 The resulting acquired Raman spectrum is given in Figure 3 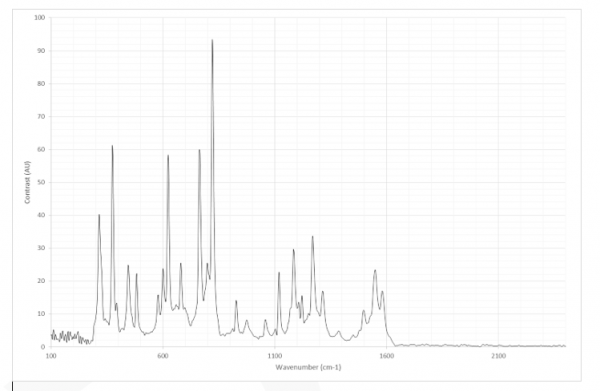 That ends our first update on this series of tests, although there have been some issue this has been a very productive issue. Checking the grating flatness when assembling these larger systems will be added to our procedures. Ensuring our customers get the best possible performance.

Finally our newest member of the team deserves a beer for being correct all along  !!!